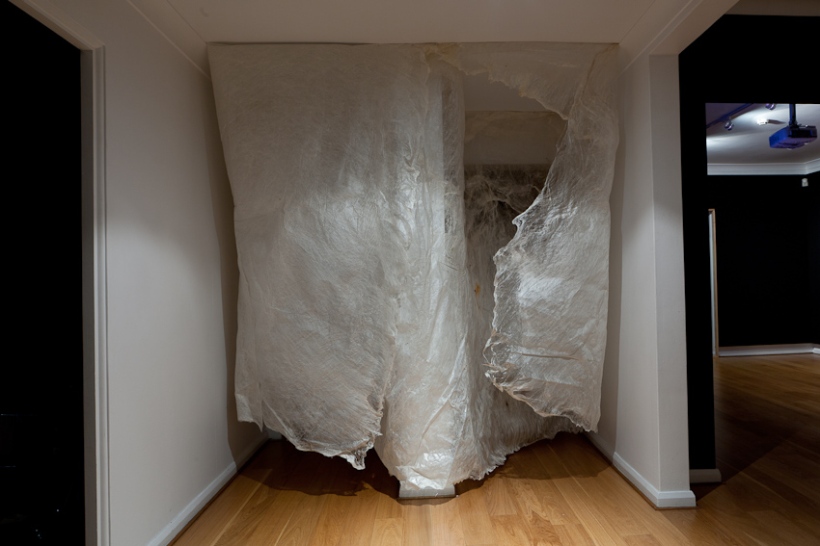 Blood on Silk: Death3  is part of the exhibition Death 3 at Parramatta Artist Studios Sydney, from 6th July until 9th September 2012.  Further details of other works in the exhibition are online at www.death1and2and3.jimdo.com

An excerpt from the catalogue essay by Ann Finnegan;

Fiona Davies’ funereal shrouds of cobwebby, white, hand-beaten silk cloth, hanging in uneven shards, is such a veil, shielding and protecting from this horror of the dead (Blood on Silk/ Death 3, 2012).  The corpse in its winding sheet; the hospital curtains, the sheet pulled up: already the body is far from us, even in this liminal proximity, tainted with dread, with mourning.  Davies has no need to present us with a literal corpse.  The winding sheet is already enough.  Death makes us trade in signs.  The body tarted up by the mortician, in an open cask, has already become a sign.

But there’s something else in Davies’ funereal drapes, a ghostliness, a presencing as if there were a something more behind the veil.  The same cloths, which separate and protect, like Turin’s famous shroud, seem to carry the imprint of a trembling liveness, an uneasy promise of contact.  It seems that through those drapes we mediate a kind of relationship with the dead, somewhat akin to the proximate distance of gloved hands.  We will never quite touch again what lies on the other side of the veil, and yet, the shroud, paradoxically seems to keep death close, tabooed at close quarters.

Davies understands the trade in signifiers, however subtle, and how the marks of strands of silk beaten unevenly into a matted submission in her cloth, seems to correspond to material, earthly struggles. Her shrouds stand in for, and displace, the dead in a mediated relationship, in which a chain of substitutes – clothes, and wrappings – protect us, proximately, whilst placing us in a zone of near communication.  Were the dead to whisper we would hear them through these shrouds of silk.